Getting back to UW Madison

Home can mean a lot of things. For me, first and always, it’s where my family is. My wife and kids, my parents, sister and in-laws, and, of course, the close friends who put up with me on a daily basis. Home is, indeed, where the heart is. I had almost forgotten that I left a part of my heart back at my alma mater in Madison, Wisconsin. Fifteen years later, I wonder why it took so long to get back and visit.

At the end of September, my wife and I had the pleasure of returning to the city where we met. We spent the weekend showing it off to our daughter. If you haven’t been there, the University of Wisconsin rests on a beautiful, sprawling campus surrounded by four lakes. The student union sits on the edge of Lake Mendota, and provides an amazing view year-round. Not far from the Union is State Street, which reaches out all the way to the capitol building. It’s an extravaganza of storefronts (which helped replenish my Wisconsin wardrobe), restaurants, and incredible people watching. 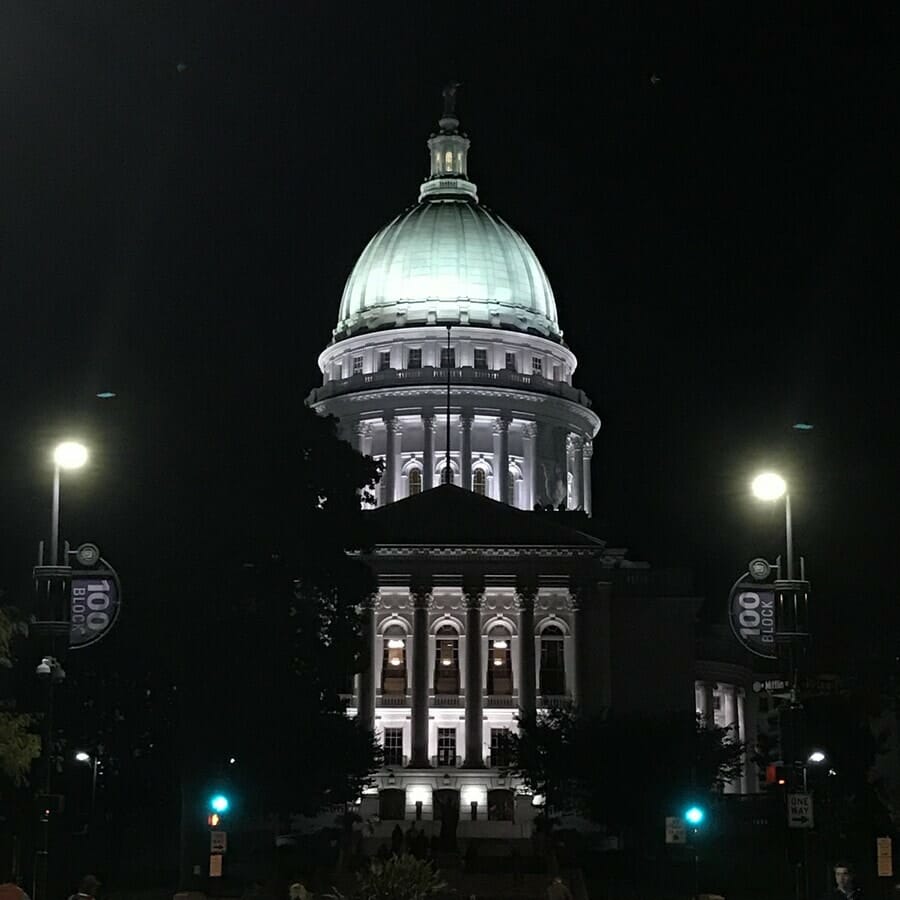 I was done with Marching Band, until… 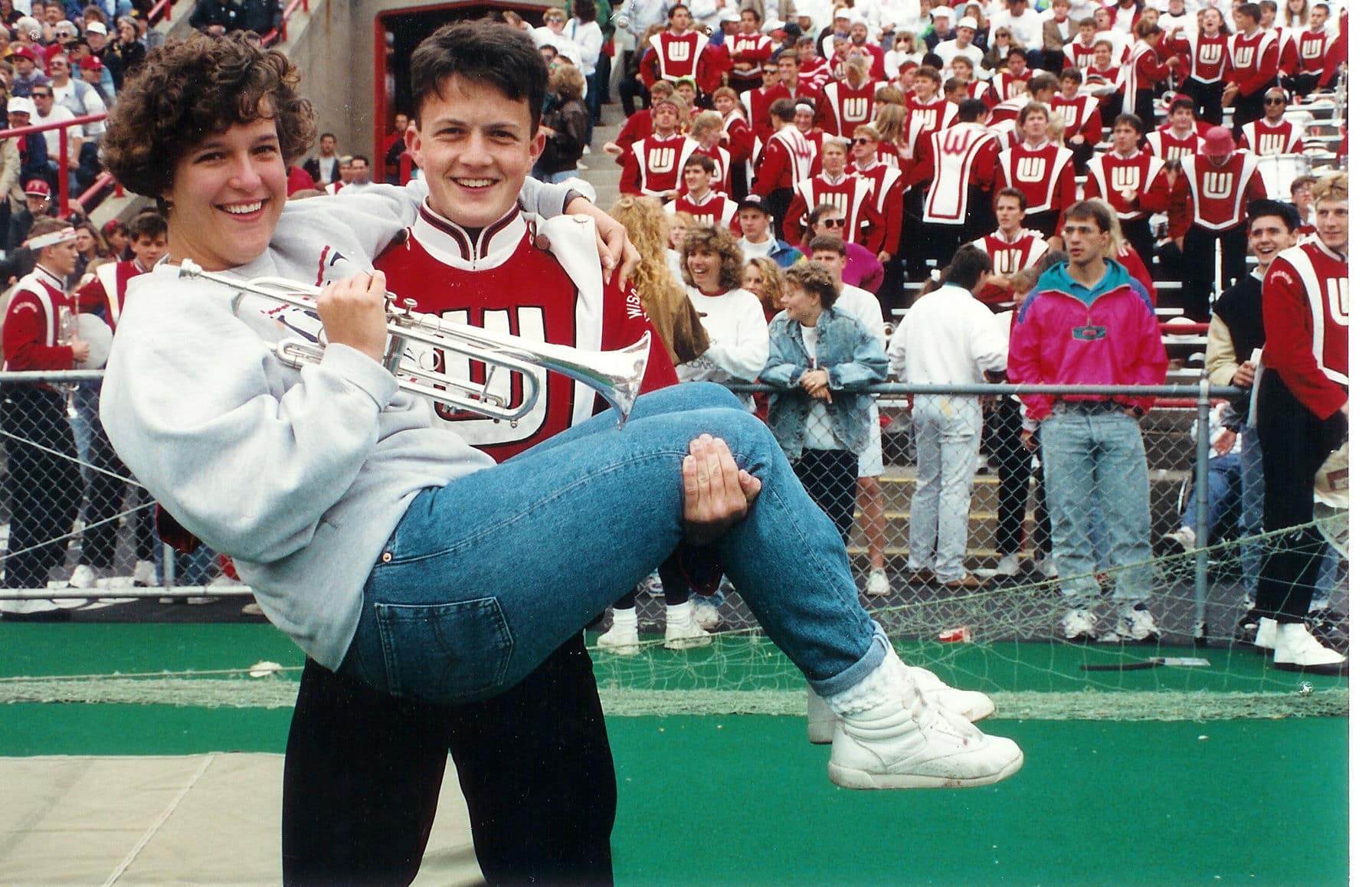 My first few years of college were bumpy. An eight-hour drive from my parents didn’t give me the option to sneak back and talk Mom into doing my laundry. I didn’t drink alcohol, and people treated me warily when I’d show up to parties with a carton of milk. (Weird, since Wisconsin is like the dairy capital of the world.) I struggled to find my place.

In high school, I was so involved in the marching band that I intended to give it a break in college. But one day, when I was riding my bike alongside Lake Mendota, I came across the UW band practicing. I was stunned. There were maybe 200 college kids holding their horns over their heads, marching down a dirt field. The lines were straight (as straight as they get the week before school), their knees reached their waists, and their toes were pointed. It looked hard, almost painful, and absolutely perfect. The band director, Mike Leckrone, must have thought I was crazy when I hopped off my bike, walked up to him in the middle of practice, and said I wanted in. He told me to get in line and start marching. I did, and I didn’t stop throughout my four years.

My senior year of college I lived in a rental house that probably should have been condemned, along with nine other guys – seven of us in the band. We called it TKB (Tappa Kegga Brew), cleaned out the basement and threw parties that a hundred or more students would show up to. It was an amazing time. I was already engaged to Angie, who I met at a band party and now we’ve been married for 24 years.

On Sundays my roommates and I would play D&D (oh yes, we reveled in being nerds.) It was the best escape during the week, there was always someone cooking brats or playing video games. I could go on, and on, but it was a kind of magic. 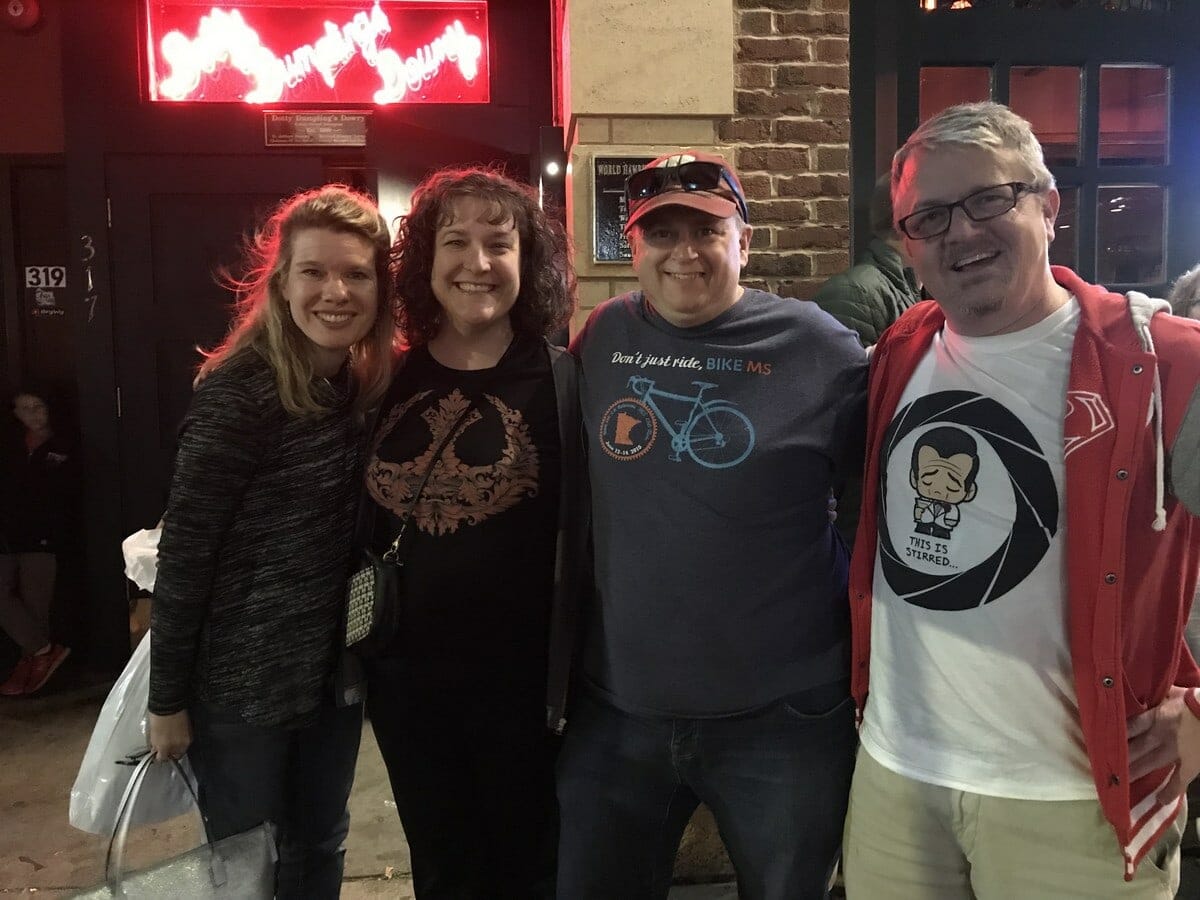 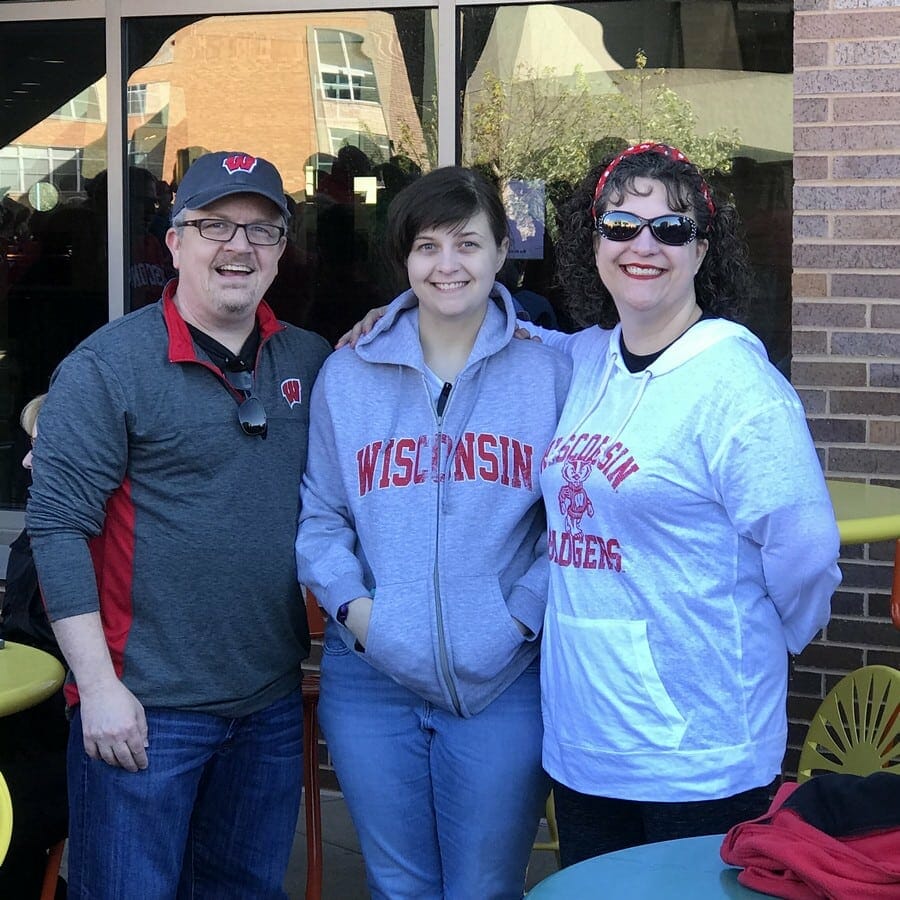 I had intended on planning a big TKB reunion this year, but did a poor job. I started putting things together right before I was diagnosed with Parkinson’s, and for some reason that became a distraction. Still, we got to see some friends I haven’t gotten to spend time within 15 years, or longer. Steve, who lived at TKB, his daughter, and our friend Joanne, who also frequented our house, met us at the practice field Friday afternoon. Not only was it great to see them, I thoroughly enjoyed the nostalgia of being there. The band practices for two hours a day, four days a week throughout the football season. I sweat and swore and worked hard on that practice field, and it was great to share a glimpse of this with my daughter, who was in her high school marching band.

We came to see the band!

We spent Saturday with Steve, his wife Amy, and their kids, chasing the band around on game day. After breakfast at Mickey’s Dairy Bar, a place where band members gathered to eat before the 6:30 am Saturday game day band practices, we went to Union South for a brief, and crowded, concert. The city really comes alive for football games, and even when the Badgers weren’t winning games, hordes of people come out to tailgate and listen to the band. We followed the band to the stadium and made it to our seats in time to watch pregame. The UW Band pregame is fun, and exciting, and an incredible display of endurance.

During half time, my band director was inducted into the UW Athletic Hall of Fame. Leckrone has been the director for 49 years, and is living proof that 80 is the new 20. When the game was done, we stuck around to watch the band perform 5th Quarter – a show that many stay to watch. They don’t just stand there and play on the field; they dance, play leap frog, serenade the student section – it’s crazy. One of my favorite memories was being a part of the first UW Band to march at Lambeau Field. The entire crowd stayed at the Packers’ stadium throughout 5th Quarter, and the crowd sang along so loud I couldn’t even hear myself play. It was a rush, to say the least. 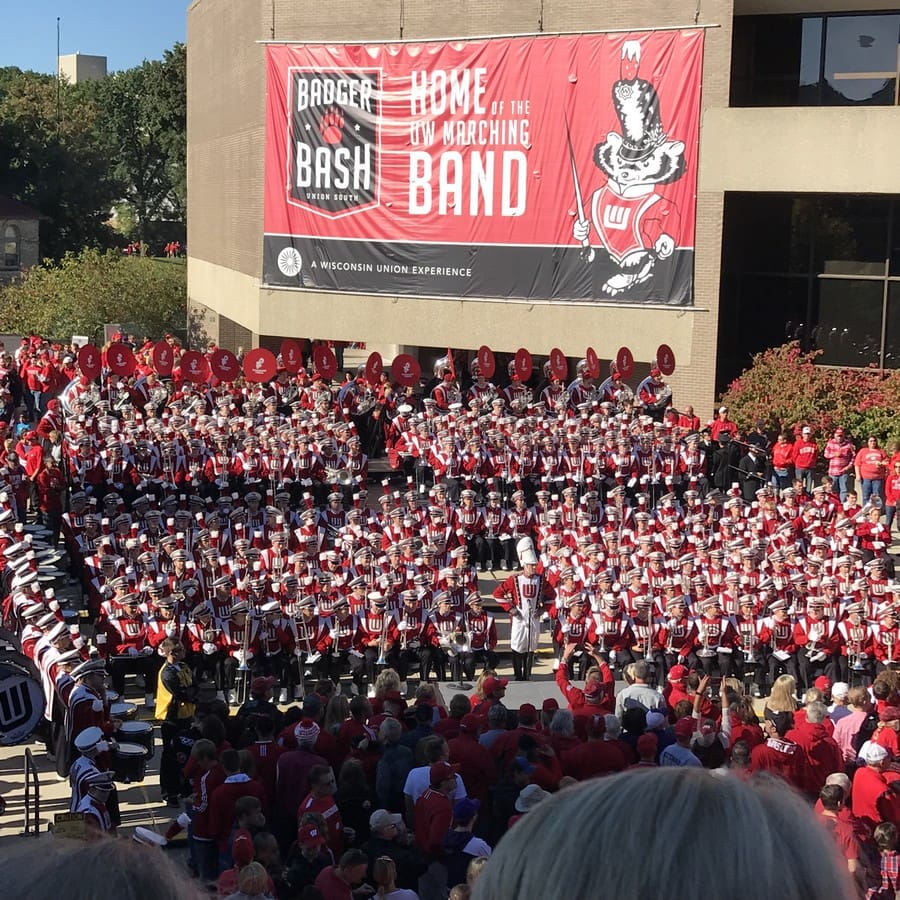 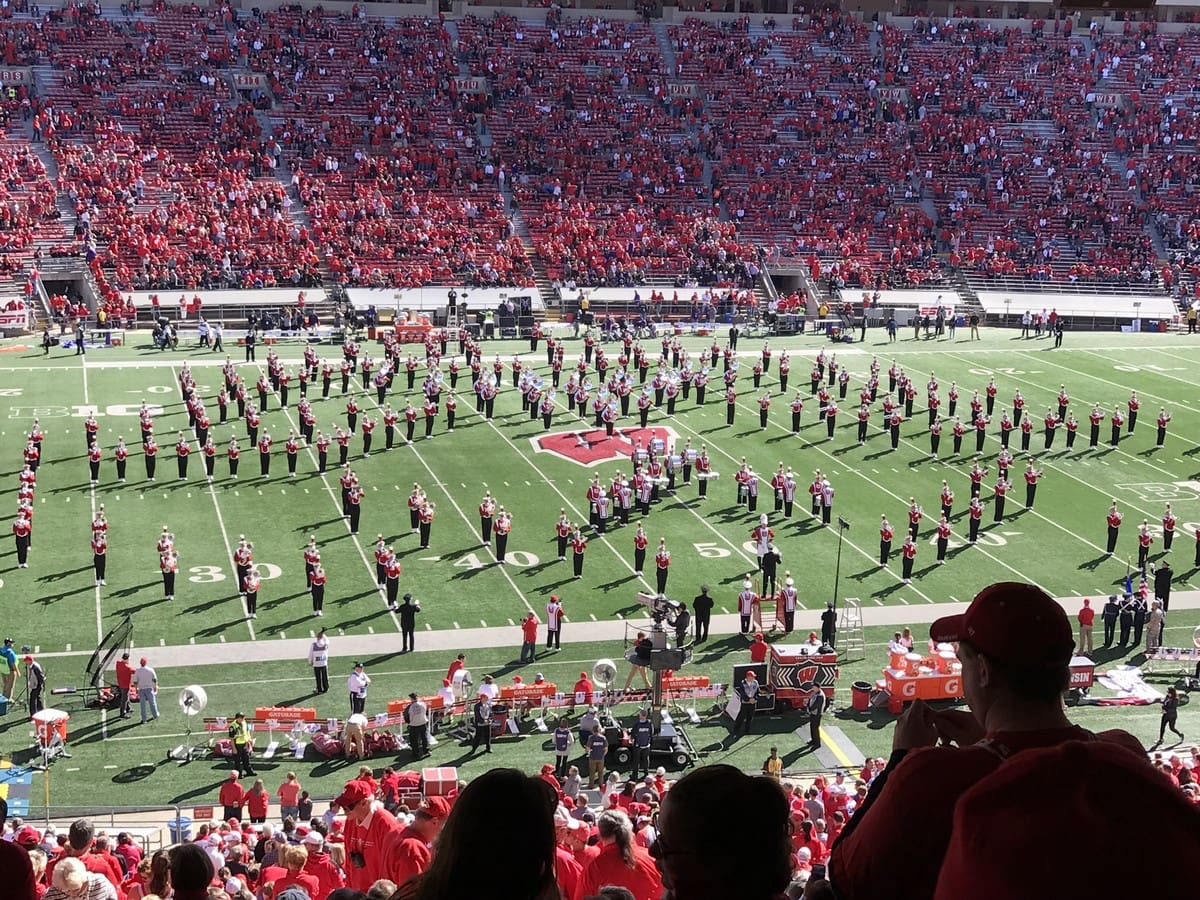 The band marched from the football stadium to the Humanities building, where the School of Music is located. We watched as they gathered for final announcements and another round of one of the school’s traditional songs, “Varsity.” It was moving to be there again. I’m repeating myself, but I also loved, absolutely loved being able to share this with my daughter. This blog post is the smallest taster of what goes on. When you’re in Wisconsin, and mention that you are, or even were, in the band, people get excited. My daughter got that, and fell in love with the band I was a part of.

Saturday night we had the pleasure of visiting with Andy, who was also a band member and lived at TKB, and his wife Amy. I haven’t seen Andy since my wedding, and that’s far too long. We were all pretty exhausted, so the visit didn’t last near long enough.

Part of me wishes that we had gotten to see more friends from TKB, but I’m not disappointed at all. I was really grateful to see the friends I could and experience Madison once again. A lot has changed in Madison, and even with the band – but the important things have stayed the same. I once wrote a speech for the band that was read the year after I graduated, where I assured my band family, “You may leave the band, but the band will never leave you.” I wasn’t wrong, it was great to get home. 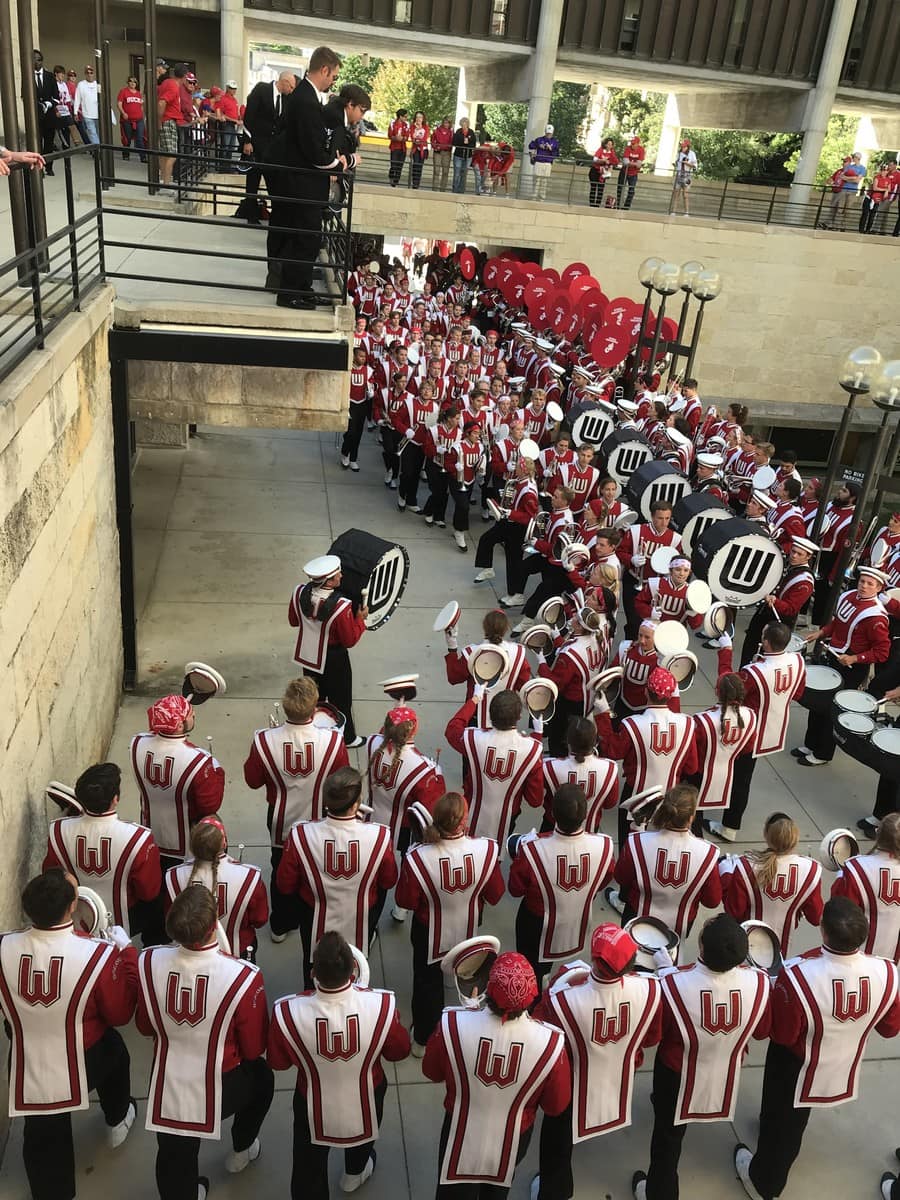