In the 1980s, Michael J. Fox was the man. Between the television show Family Ties and, of course, Back to the Future, he was at the height of his popularity throughout my high school and college years. I benefited greatly from this, because some people thought I looked like him. Actually, a lot of people. I’d get stopped at malls or grocery stores by random strangers who would say, “Did you know you look just like Michael J. Fox?” My nickname in the University of Wisconsin Marching Band was “Alex” after Alex P. Keaton – his character on Family Ties. I was grateful for our similarities, but really wish they would have ended there. 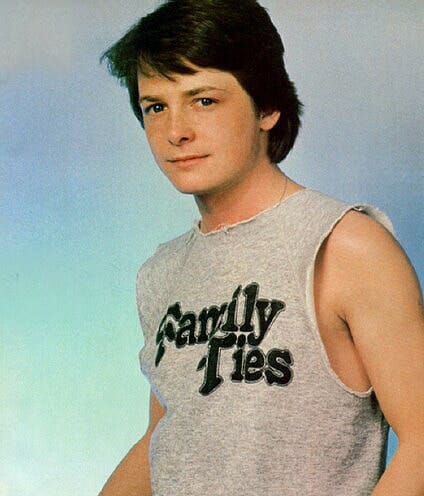 It wasn’t a new superpower

At the beginning of 2017, I started noticing a distinct tremor in my right hand. I was going through an incredibly stressful time, I mean, everything was sort of falling apart and my anxiety has always expressed itself in odd ways. (How strange that when you bottle everything up it eventually explodes. <-Insert sarcasm.)

As the year progressed and my life started getting taped back together, the tremors got worse, not better. While it was nice that I could shake a can of spray paint without trying, it also wasn’t as funny as it should be.

The last thing you want to do is self-diagnose with WebMD because you’ll come to the conclusion that you either have cancer, some rare disease from a country you can’t even pronounce, or you should already be dead. So, I started out with a round of blood-tests that showed everything was a cocktail of healthy cells and vodka. A visit to a neurologist led to a radioactive brain scan, and the short story is I didn’t get any superpowers.

The Universe conspiring against m

On the 4th of July I received an email with the results: probable parkinsonian syndrome. It wasn’t one of the happier moments in my life. This is, however, finally the proof I’ve been looking for. If you follow my blog and have heard me bitch about it, the universe really does conspire against me. You thought I had Angst before…

I called my doctor first thing the next morning and had the choice of meeting with her at 10:30 on the 7th, the morning we were leaving for vacation to Colorado, or wait until October – though she’d put me “on top of the waiting list”. Considering that it was important enough to be at the top of that list, my wife and I went to the appointment.

Anticipation is poor company and it felt like we spent a year in that waiting room while the appointment rushed by like The Flash on cocaine. I remember looking at a lopsided image of my brain. The scan showed that my uptake of dopamine in the left hemisphere of my brain is practically non-existent. Between that and the tremor, my neurologist’s official diagnosis is Parkinson’s Disease.

I haven’t completely wrapped my brain around what this means to me, my family, and my future. First of all, I’m not dead yet, and not dying anytime soon. Parkinson’s doesn’t directly kill people or decrease life expectancy, so nothing will change in the short term. While scary, this isn’t nearly as devastating as it could have been. It’s not a cancerous tumor or Atypical Parkinsonism – the tremors are occasionally affecting my right arm and leg. My doctor seemed surprised, and impressed by how few symptoms I’m showing compared to what she saw in the scan.

Degeneration also tends to be slower when you are diagnosed with Parkinson’s at a younger age. Between that, and the drug I’ve started taking, it’s very possible the progression of the disease will be dramatically delayed. So far, the occasional tremor is my only symptom, and I’ve heard some encouraging stories of people like me whose symptoms don’t worsen for 20+ years. I’m convinced this is going to be me, too, and will do everything in my power to make it happen.

This won’t affect my writing. I don’t plan to stop, ever. I’m 25,000+ words into the fifth Angst novel: Something Something about Angst. I have already started lining up cons for next year. When you see me at a con, I may be a little shaky. That either means I’m excited to see you – like a puppy wagging it’s tail, or it’s the Parkinson’s. (I’d go with the puppy explanation, it’s a lot more fun to think about.) Eventually, I may go to less cons because I tend to tire easily (I’m just glad to have an excuse for exhaustion other than being old.) But really, I’ll cross that bridge when it comes. I’m not done yet. 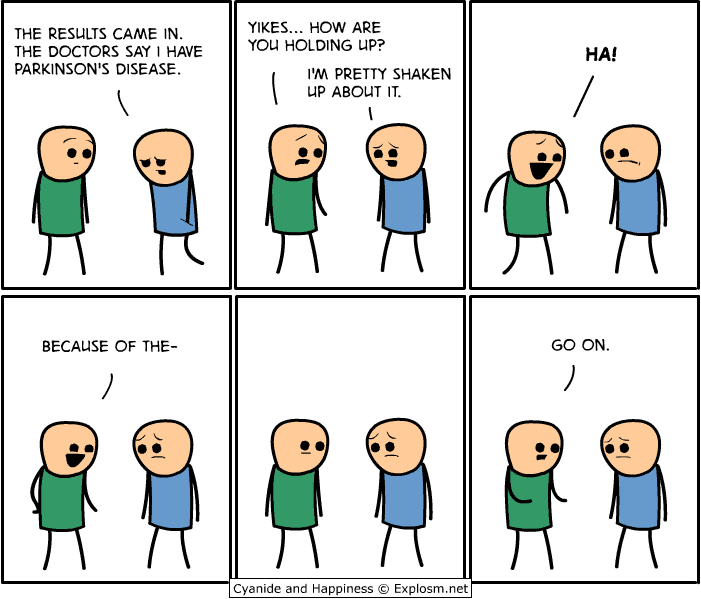 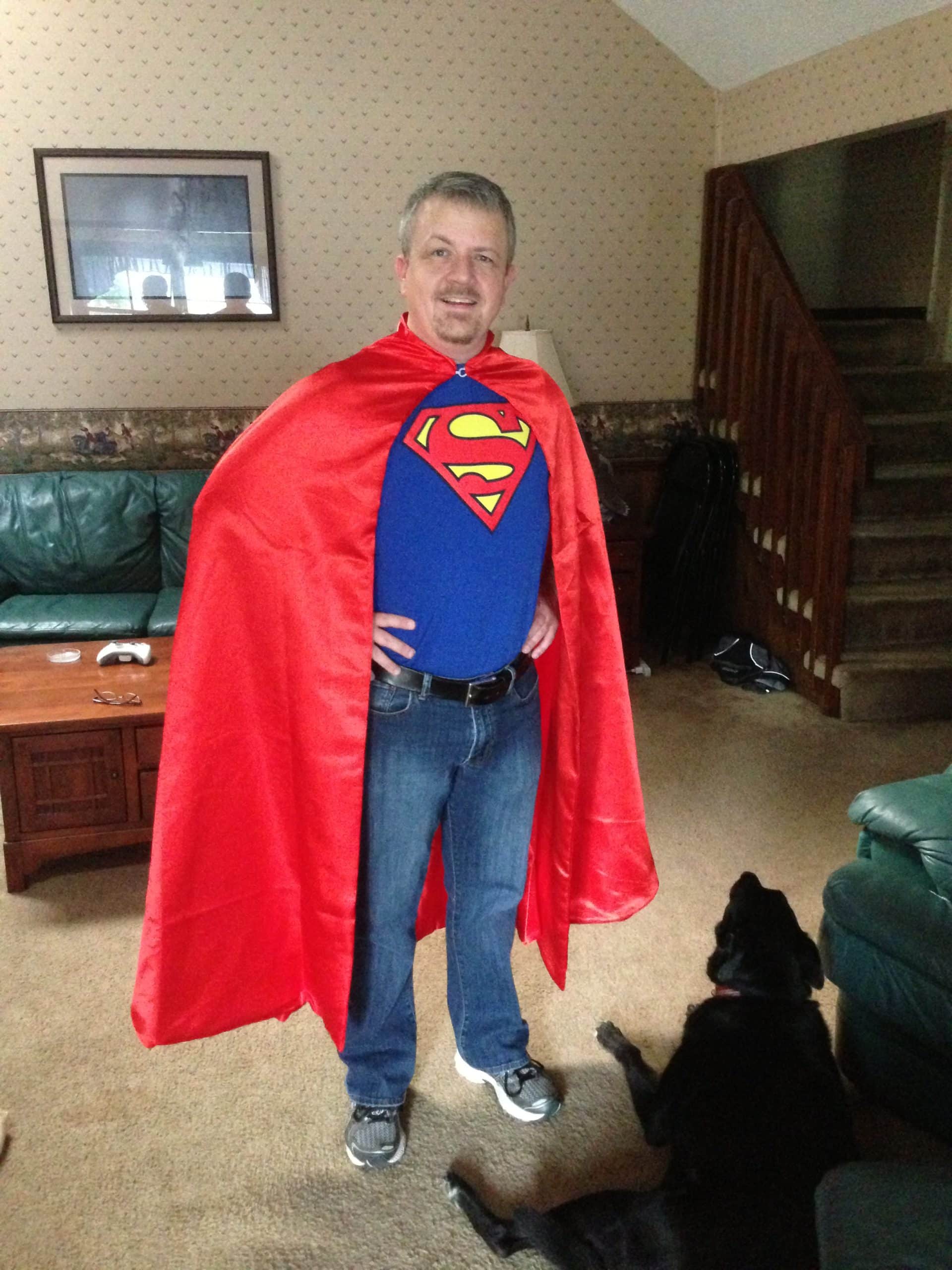 So far, the hardest thing has been telling everyone. Every time I let someone know, it feels like I’m accepting the inevitable. It’s silly, but I also feel like I’m letting everyone down. (Kryptonite wasn’t supposed to affect me, that’s the other Superman.) The reactions have been a mix of tears, support, and denial. The last one is weird, when one friend’s reaction was like, “Ok.”

But I get denial, I’m living it. I’m pretty sure I’m going to be the only person who ever cured himself of Parkinson’s Disease with denial and confidence and quippy jokes. Right? Right? Sigh.

Some have asked what they can do. Encouragement means everything, and really, that’s it. The easy thing would be for you to say, “I’m sorry” and for me to feel sorry for myself. But I’m going to do everything I can to face this head on and with a positive attitude. It’s like Superman says, “You know what they say about the never ending battle? It’s never ending.” That said, thanks for the support. Now you’ll have to excuse me while I tell the Universe to go fuck itself.